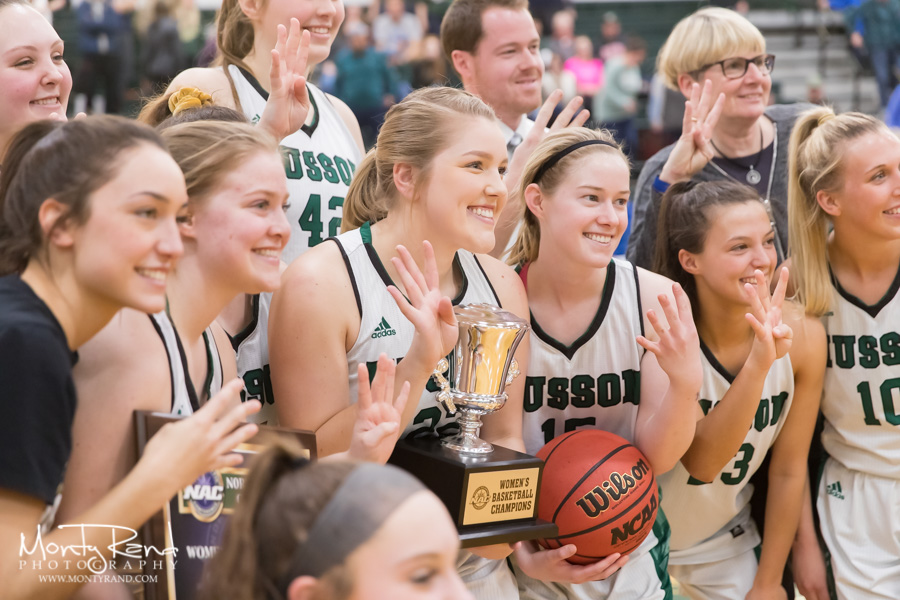 Husson becomes the first school in NAC history to win four straight women’s basketball titles, while breaking the three-way tie with Castleton University and MMA for the most with their sixth. This victory also marks the first time in over 58 years that a Husson University basketball team won four or more conference championships. The men won seven in a row from 1956-61.

The two NAC finalists found themselves in a defensive struggle from the opening tip as Maine Maritime received early baskets from Melinda Ogden, Lauren Plissey, and a free throw from Plissey to race out to a 5-0 lead eight minutes and 14 seconds into the game. A made jump shot by Megan Peach put the Eagles on the board with 7:19 remaining in the first, but both teams would trade baskets back-and-forth the rest of the quarter as MMA held a three-point advantage after one, 11-8.

Worcester cut the MMA lead to one with a made jump shot two minutes and 34 seconds into the second before tying the game at 13-13 two minutes later with the Eagles first three of game. Husson closed out the first half on a 9-4 run thanks to Vanessa Duarte‘s three 3-pointers. The Eagles look a 22-17 lead into the intermission. Duarte led all scorers with nine points, while Alayne Felix record six points to lead the Mariners.

Worcester came out of the break hot for the Eagles as she pushed the lead to ten with 6:42 remaining in the third with a 3-pointer and a jumper. Felix cut the Eagle lead back to eight 13 seconds later, but that was the closest the Mariners could get as Husson took a 36-23 lead into the final quarter of the game.

Husson began the fourth with an old fashion 3-point play from Peach to put the pressure on the Mariners. They responded with a quick five-point swing of their own by Felix and Megan McLean to cut the Eagle lead to eight before Worcester made a huge 3-pointer to extend the lead back to 11 with 6:09 remaining.  With 3:51 left in the game, Morgan Boudreau’s jumper sparked a Mariner comeback attempt that cut the Eagle lead to a few buckets, but two charity stripe makes by Emma Alley in the closing minutes clinched the 58-51 victory for Husson.

Husson will now wait for the selection show on Monday at 2:30 p.m. to see who they will play in the 2019 NCAA Women’s Basketball Championship Tournament.

Before your next league game, tourney event or picture day, give us a call at 207-990-3456 or send an E-Mail to find out more about our unique services. It will be the best move you’ve ever made.

“Sports leagues all over are having fantastic results with our Action Photography service!“

For any inquiries please email